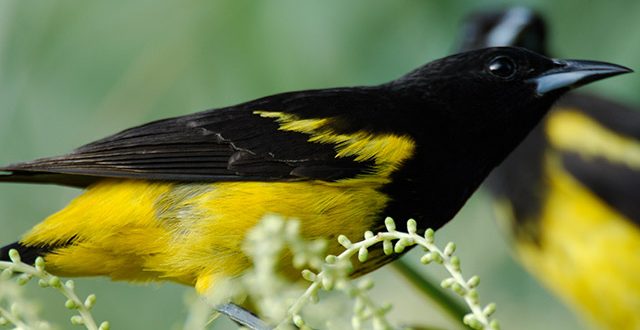 The Bahamas National Trust is collaborating with the Omland Lab at the University of Maryland to determine nesting habitat for the Bahama Oriole on Andros – where fewer than 300 of these rare birds are thought to live.

Up to this point, orioles were thought to nest almost exclusively in developed areas, in non-native coconut palms. But initial research in 2011 observed adult birds foraging in pine and coppice forest.

Current research let by Dr. Kevin Omland of the Omland Lab, University of Maryland, Baltimore County discovered orioles nesting deep within the pine forests, building in understory palms and in pine trees themselves.

This demonstrates that Bahama Orioles are able to utilize a wider range of habitats than previously thought, could have significant implications for our understanding of the population ecology and conservation needs of this endangered species.

The critically endangered Bahama Oriole (Icterus northropi) originally lived on Abaco and Andros, but was lost to Abaco in the 1990s. Now it struggles to survive on Andros.

This special bird is found in very small numbers in isolated pockets on Andros. The most optimistic population estimate puts the total at fewer than 300 individuals.

In 2010, the Greater Antillean Oriole (Icterus dominicensis) was separated by the American Ornithologists Union into four species, one being the Bahama Oriole.

New species are always a source of excitement, but in this case the announcement was overshadowed by a sense of alarm and urgency, as this new species was limited to certain parts of Andros, in small and diminishing numbers.

It was being seen less frequently in North Andros – where it had formerly been abundant. It was extirpated on Abaco by a combination of habitat loss and a population that could not breed prolifically enough to sustain itself.

The main causes of the decline on Andros include Lethal Yellowing Disease of the coconut palm, which is the prime nesting habitat for the oriole. In some areas on Andros (e.g. Staniard Creek), the palm has been all but wiped out.

The arrival and spread of the Shiny Cowbird (Molothrus bonariensis), a brood parasite that lays its eggs in the nests of other bird species, is also a factor. The cowbird reached Andros in the mid-1990s.

Other factors put forward include forestry work, forest fires, diseases, rodents and feral cats – problems that affect many other birds, such as the Abaco parrot.

More research needs be conducted and the BNT working with the Omland Lab with funding from the American Bird Conservancy will be looking this year to continue population estimates as well as conducting outreach on Andros to ensure that residents are aware of the endangered status of the Bahama Oriole.