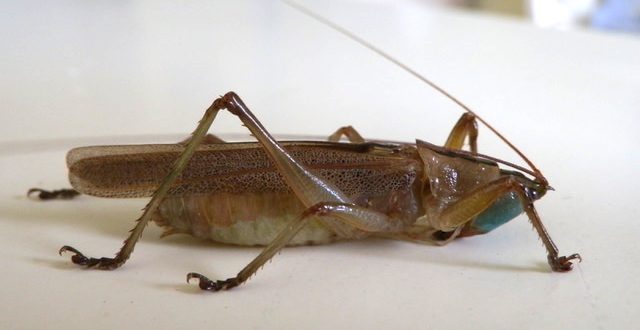 A new species of insect has been discovered at the Leon Levy Native Plant Preserve in Governor’s Harbour, The Bahamas National Trust’s (BNT) first national park on Eleuthera. The insect is a katydid and belongs to the same group as grasshoppers and crickets in the order Orthoptera.

Specimens of this new species were first collected in 2013 by Dr. PaulA. De Luca, an assistant professor in the Biology Department at the University of The Bahamas. He made the discovery while conducting a survey of arthropods (the animal group that includes insects, spiders, scorpions,centipedes and crabs) at the Preserve.

According to Dr. De Luca,“This find – a new species to science – is a reflection of how much there is still left to learn about insects in The Bahamas, and it only highlights the incredibly important function of habitat preservation. Weare definitely protecting many species that we don’t even know about yet.”

To the layperson, katydids resemble grasshoppers, but are actually more closely related to crickets. Katydids are well-known for the fact that males in many species produce acoustic songs to attract females.

Dr. DeLuca’s collaborator on this project is Dr. Glenn Morris, an emeritus professor from the University of Toronto and an expert in katydid taxonomy. He determined that the new species belonged in the genus Erechthisas it closely resembles Erechthis gundlachi, a katydid that occurs in Cuba and Hispaniola, but not in The Bahamas.

The new species was named Erechthis levyi, in honour of Leon Levy, after whom the Preserve is named. After Leon’s death in 2003, his wife Shelby White wanted to commemorate her husband’s devotion to the island and his love of the native flora. She created the Leon Levy Native Plant Preserve in partnership with The Bahamas National Trust. It opened to the public in 2011.

The 25-acre Preserve promotes plant conservation and features the economic, medicinal, historical and agricultural importance of native plants. It has become an important visitor attraction on Eleuthera. As a national park, a major part of it’s mission is to protect Bahamian biodiversity, and therefore the discovery of this new species is a testament to the Preserve’s goal of documenting the flora and fauna of the island.

There are a number of characteristics that differ between E. levyiand E. gundlachi, but two of the most interesting are physical traits. The first is that E. levyipossesses a striking turquoise-coloured head that is lacking in E. gundlachi (see picture). The second is more difficult to observe with the naked eye.

At the tip of the male’s abdomen where the genitalia is found,each species bears a curious structure – the subgenital plate prong – which is a device used to remove rival sperm from a female’s genital tract prior to mating with her. The prong is markedly dissimilar in shape between the two species, which suggests each one has a different way in which males physically “hook up”with females during mating.

Future research planned by Dr. De Luca includes mapping the full distribution of E. levyiin The Bahamas, which at present is only known from specimens collected on Eleuthera.“What is interesting about this find is that E. levyidoes not appear to occur anywhere else in the Greater Antilles, which suggests it may be endemic to The Bahamas, making it the first truly Bahamian katydid.”

The scientific article describing the new species can be downloaded atwww.levypreserve.org.

The BNT is a non-governmental, non-profit, membership organisation working to protect Bahamian natural resources by building a network of national parks and promoting environmental stewardship.