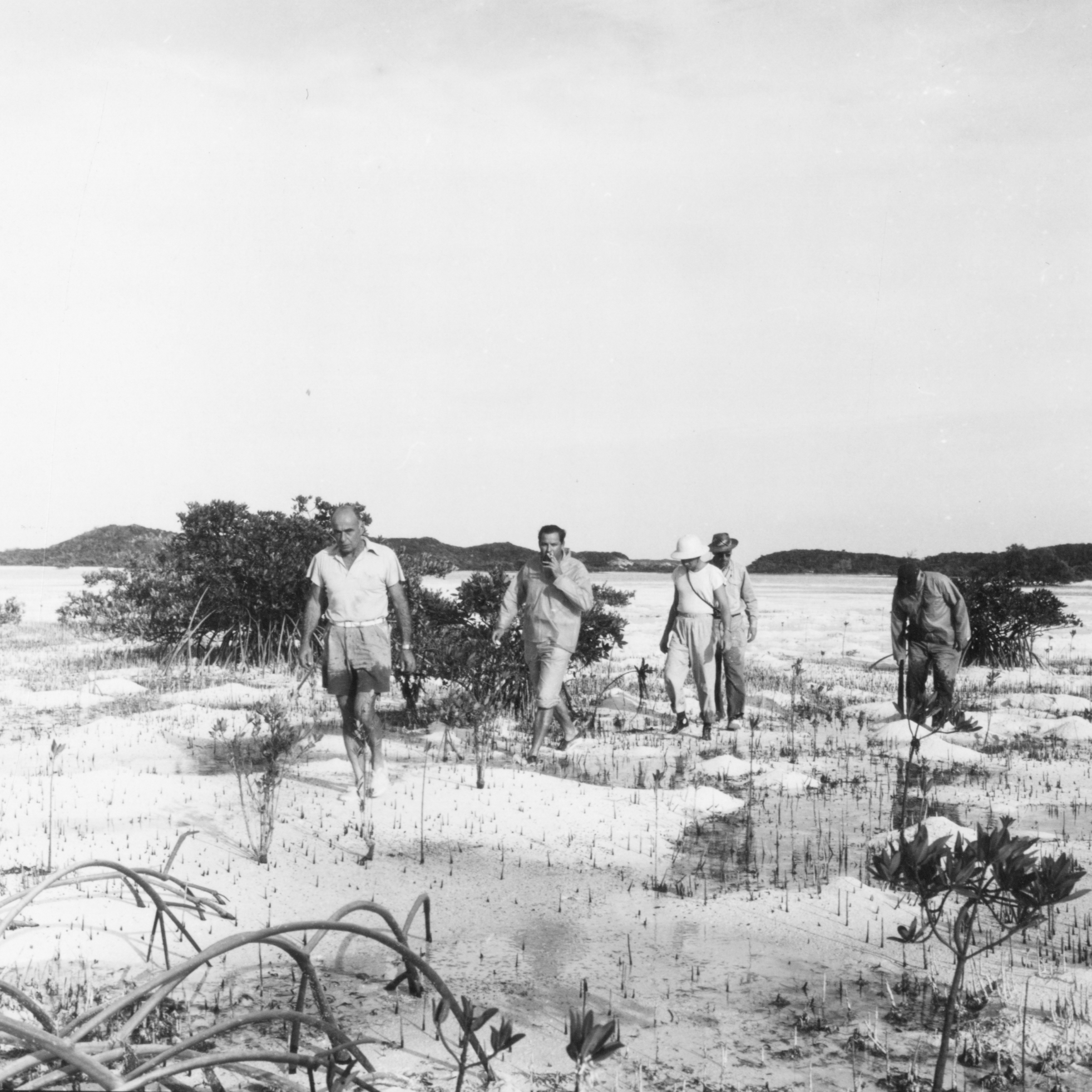 The initiative for setting aside islands in the Exumas for conservation began with Colonel Ilia Tolstoy, grandson of Leo Tolstoy, who had first visited The Bahamas in 1931. In 1953, he began a discussion of establishing Bahamian protected areas with Richard Pough of the American Museum of Natural History in New York, and founder of the Nature Conservancy.  This began a dialog that crossed the Atlantic to the Director of Great Britain’s Nature Conservancy , then back to the Right Honourable,  Earl of Ranfurly, Governor of The Bahamas, and the Honourable K.M. Walmsley, Colonial Secretary.  Finally in Ilia’s own words “It was indeed a memorable day when on February 13, 1956, I received a letter from the Governor of The Bahamas confirming the that the Crown had set aside approximately 22 miles of the Exuma Cays from Shroud Cay to Little Bell Island  …. for one year”. During that time an organization would undertake exploring the possibility of a protected area and providing concrete recommendations and justifications to the Bahamian government as to why the area should be permanently protected for conservation. 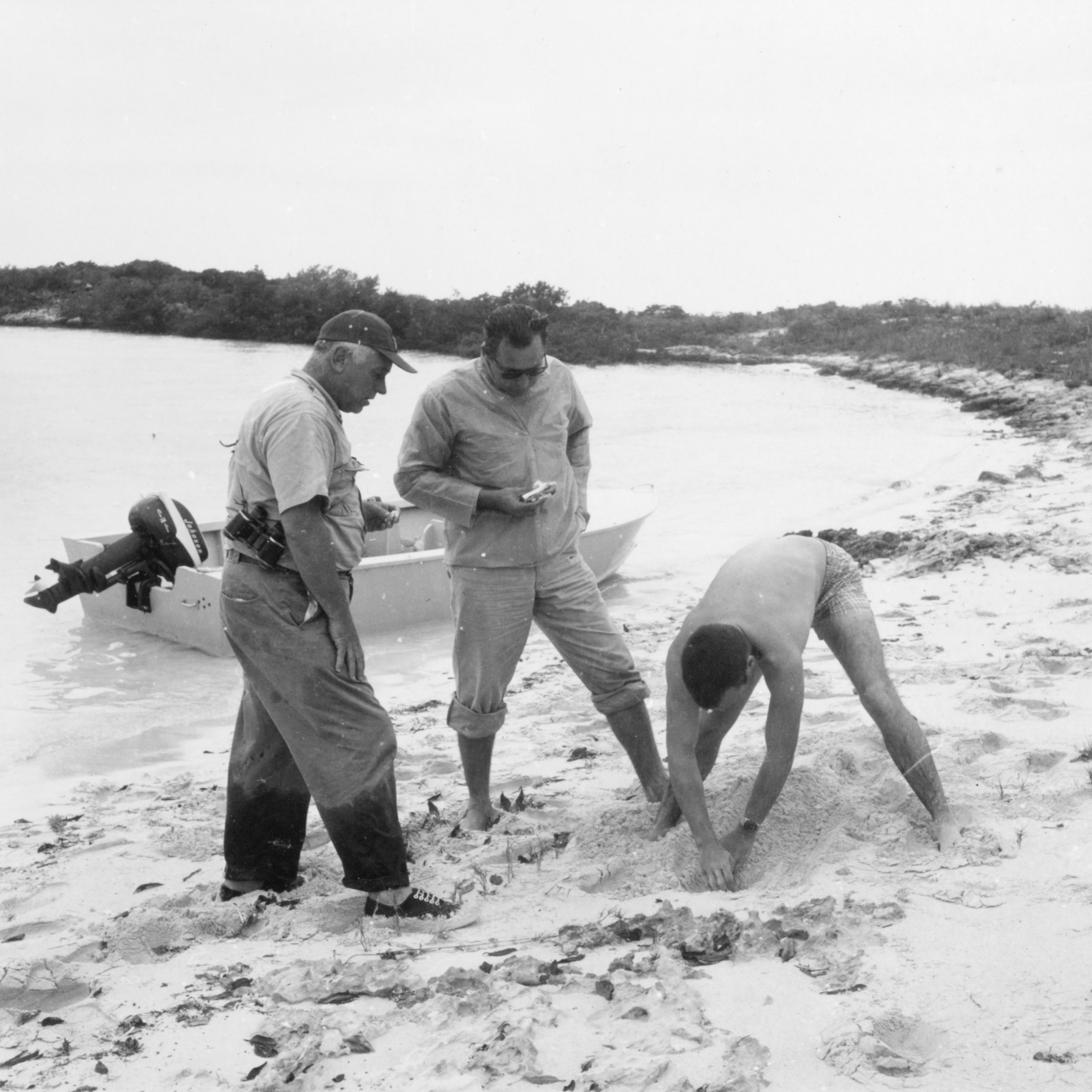 Concurrently, awareness of the depletion of marine resources and the need for marine parks was growing throughout the world.  Only a few marine parks existed prior to the 1960’s, one being the Ft. Jefferson National  Monument in the Florida Keys. In 1954, at the urging of the dive community, Don McCarthy of the Bahamas Development Board convinced the Board to release a story endorsing the marine park concept.  News of this reached Richard Pough who suggested to Tolstoy that the Exuma area designated by the Crown be expanded to a Land and Sea Park.  Fairfield Osborn, President of the New York Zoological Society (now Wildlife Conservation Society) , agreed that the Conservation Foundation would sponsor the required survey and the Exuma Cays Project was born.  Funds were quickly raised and the scientific team for the required survey was appointed.  Representing The Bahamas were the Honourable Herbert McKinney and Director Oris Russell of the Bahamas Department of Agriculture and Marine Products: others were ornithologist Robert P. Allen of the National Audubon Society, Superintendent Daniel Beard of the Everglades National Park, John O’Reilly of Sports Illustrated Magazine , ichthyologist, Dr.  John Randall of the University of Miami, coral scientist, Dr. Donald Squires of the American Museum of Natural History, and photographer Russ Kinne of New York. Co-leaders of the team were Ilia Tolstoy and Dr. Carleton Ray of the New York Zoological Society.  The survey lasted from January 22 – 28, 1958.  The team’s report followed in only a few weeks concluding that the area had “outstanding natural values” 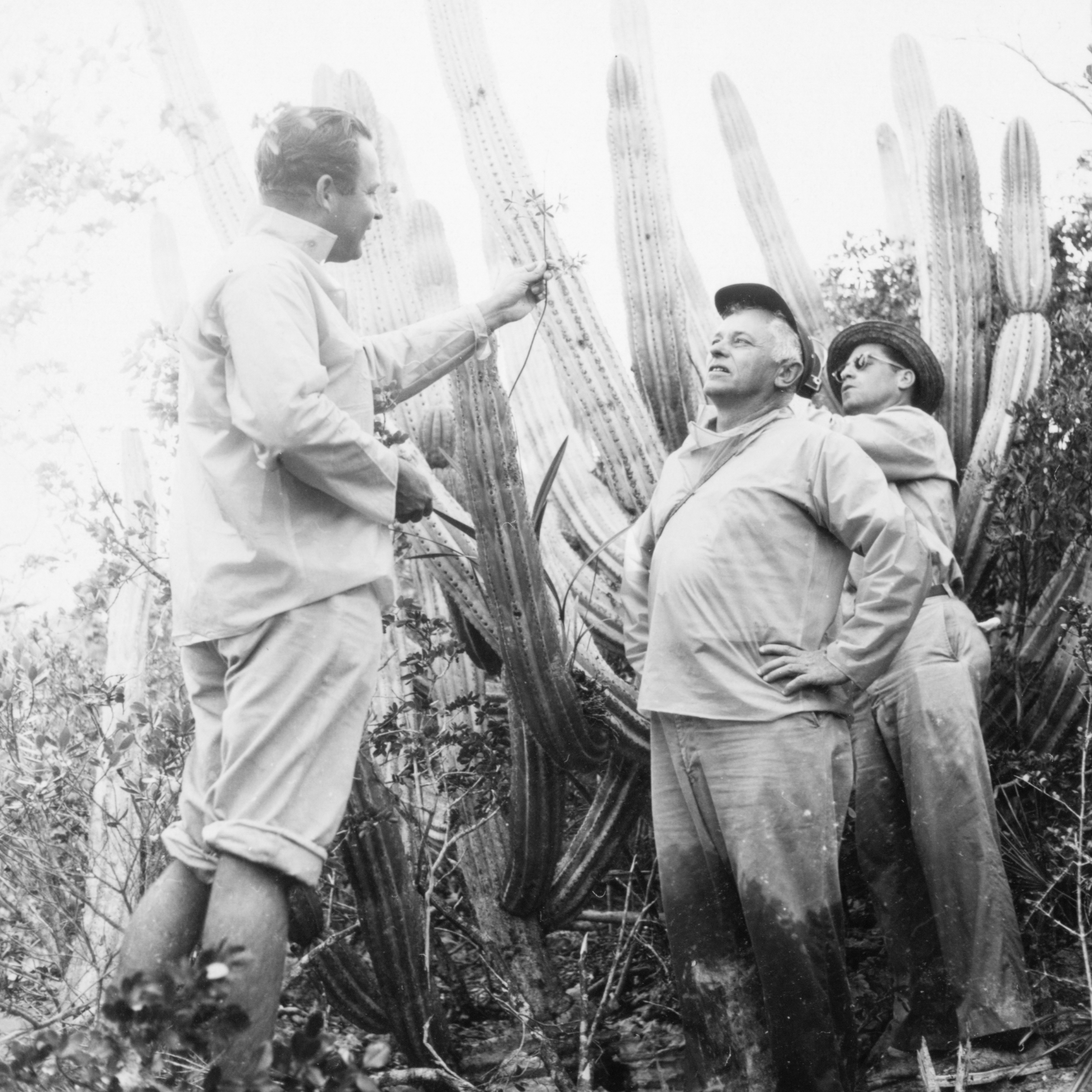 In the words of project team member Daniel Beard, Superintendent of the Everglades National Park :

“There is a considerable degree of unity to the proposed area. It embraces all the territory, both land, and sea, that is required for effective administration and continuing representation of its biological and geological resources.  This is of the utmost importance in a biological park, of course, because failure to include an adequate biological “unit” can negate the whole project.”

The Reports conclusion also laid a visionary foundation for the future:

“The Exuma Cays Park under consideration should be regarded as only the beginning of a conservation movement that is vital to The Bahamas as a whole. It will also be a beginning of a new concept, integrated land- and -sea conservation, in which The Bahamas will take the lead and show the way to other nations throughout the world.”

However, the Report of the Exuma Survey team, was only the first step. Methods for choosing the best locations for parks and protected areas in The Bahamas remained to be developed by future scientists and managers, and mechanisms for park management required a new Bahamian law. Consequently, the Honourable Godfrey Higgs followed the model of the 1909 British National Trust Act.  Its passage on July 13, 1959, allowed the Exuma Cays Land and Sea Park (ECLSP) to become an emerging reality, pending only an official lease from the Crown.  It was not until March 5, 1964, that a ninety-nine-year lease awarded to the BNT made the park official.

The lease was signed by BNT President William Wikoff Smith and Vice –President J. Andrew McKinney, and witnessed by Godfrey Higgs.  Under the wording of the lease, all of the enclosed area that suggested by the Report survey is included under Bahamas National Trust jurisdiction, but in actuality, some of the islands remain to this day as private inholdings*.

Today the Exuma Cays Land and Sea Park is a conservation success story.  Initially, Park By-Laws allowed each boat a daily fishery catch quota.  In 1986 recognizing unsustainable pressures on fish, lobster and Conch populations, as well as,  coral reefs the BNT declared the entire 176 square mile park a no-take fisheries replenishment area, or fishery reserve  – a “first” for the wider Caribbean.  Scientists and managers promote such areas as among the best ways to sustain fishery resources.  The Park has become and important factor in the economy of the Exuma Cays, through the tourism it attracts and also for public education.

Despite many challenges and the need for detailed planning and action, today, the Exuma Cays Land and Sea Park is a conservation success story as a functional marine reserve.  Scientists have documented that not only are the marine resources of the Exumas being enriched, but also that the park serves to replenish areas such as  South Long Island, almost 150 miles away. The ECLSP is also an important factor in the economy of the Exuma Cays, providing direct benefits through the increased tourism that it attracts.

On October 29, at the 2018 Our Ocean Conference in Bali, Indonesia where representatives from about one hundred nations and hundreds of marine conservationists gathered October 29-30, the Marine Conservation Institute awarded seven new blue parks, adding them to its Global Ocean Refuge System of highly protected marine reserves. Receiving a Platinum Award was the Exuma Cays Land and Sea Park,  Minister of the Environment and Housing The Honourable Romauld Ferriera attended the Conference and received the award for The Bahamas and the Bahamas National Trust.  Global Ocean Refuge awards are akin to Oscars™ for the best movies, Olympic medals, or Michelin stars for the best restaurants. Global Ocean Refuges have been carefully researched by the Marine Conservation Institute and then vetted by an international council of respected marine scientists. They meet the highest science-based standards for biodiversity protection and best practices for management and enforcement. These strongly protected blue parks will make outstanding contributions to saving marine life for future generations. 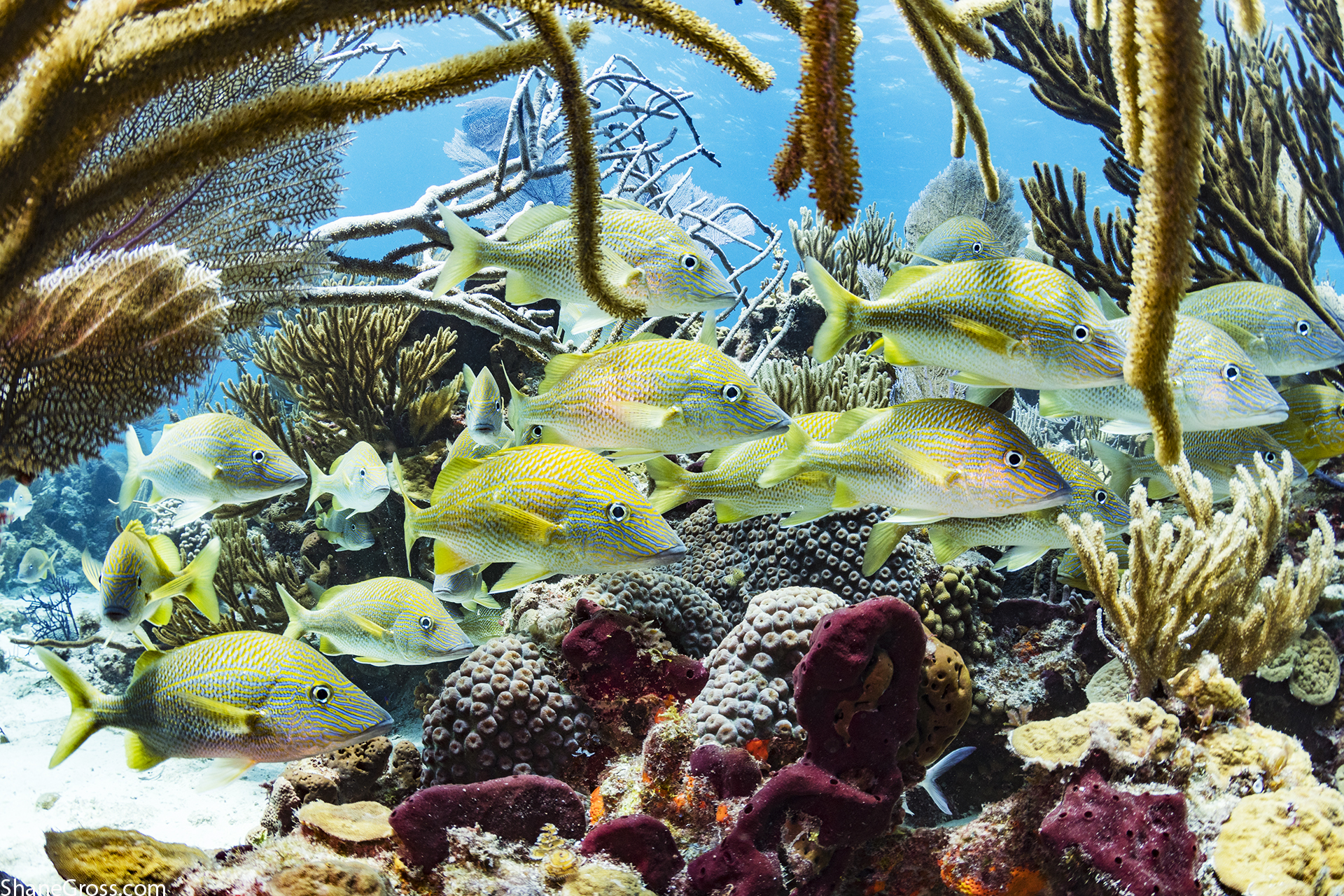 In the message sent to the conference upon receiving the award,  Janet Johnson, President of The Bahamas National Trust said “The Bahamas National Trust is honoured to accept this Platinum Global Refuge Award. To have marine scientists from around the world recognise and recommend the Exuma Cays Land and Sea Park for the award is overwhelming, but also rewarding. The original members and advisors of the Exuma Expedition in 1958, who recommended the protection of the Exuma Cays Land and Sea Park, the first land and sea park in the world, were visionaries. They envisioned a park in which the land and sea were held interdependently with man, as an integral part of the natural system, reaping a resource harvest, enjoying natural aesthetic values, but never destroying resources beyond their ability to replenish themselves. Their vision led to a park that would influence the course of inshore, marine conservation throughout The Bahamas and around the world. This award recognises that vision and helps to ensure that the ECLSP, through the implementation of science-based management standards, conserves unique island ecosystems, functions as a marine fishery reserve and assures that the beauty of the area will be enjoyed and experienced by future generations in perpetuity.”

*Private Landholdings in the Park ( taken from the ECLSP Management Plan)

Within the boundaries of the ECLSP, approximately 68% of the land area is Bahamas National Trust Property.  When the park was founded in 1958, there were existing landowners whose rights and privileges were protected under statute law in The Bahamas.  Development on private land is controlled through permits issued by the central government and local government authority. The advocates stricter zoning laws of private lands both within and adjacent to National Parks.  The enactment of the Bahamas National Trust Act did not take away the inalienable rights of private landholders in the ECLSP, as enshrined within the Constitution of The Bahamas.

The Current high real estate value of these in-holdings makes it cost prohibitive for outright purchase by the BNT. Thus the BNT must maintain close, professional and cooperative relationships with landowners within the park in hopes of encouraging activities that are compatible with the objectives of the park.  Simultaneously the BNT will always maintain as a long-term goal the development of the financial resources and support needed to acquire existing private lands when they become available.