In light of the busy hurricane season , we thought it would be appropriate to talk a bit about The Retreat Garden and the hurricanes it is has weathered.

Margaret and Arthur Langlois purchased the 11 acre property in early 1925 and moved in as newlyweds in August of 1925.  They had already invested many hours of work in their garden and in July of 1926 they were just seeing the fruits of their labor.  On July 25th , Margaret and Arthur walked through their garden, hand in hand , marveling at the beauty of their new home.

They awoke the next morning to a storm with winds of 120 mph and watched many stately palms fall to the ground.  Margaret realized that her garden where she had found such peace and joy was gone.  She writes in her diary:

“For three days I could not eat, then we set to work to see what we could save out of the ruins. With a sad heart, I watched them pull up what trees they could, the rest they destroyed.”

On September 17th, the second hurricane hit Nassau.   It was unheard of to have two hurricanes in one year. She writes :

“Once more the garden was desolate. Once more heartache and pain. Again we worked.  The same trees were hoisted back up.  The props could not hold them against that wind.” 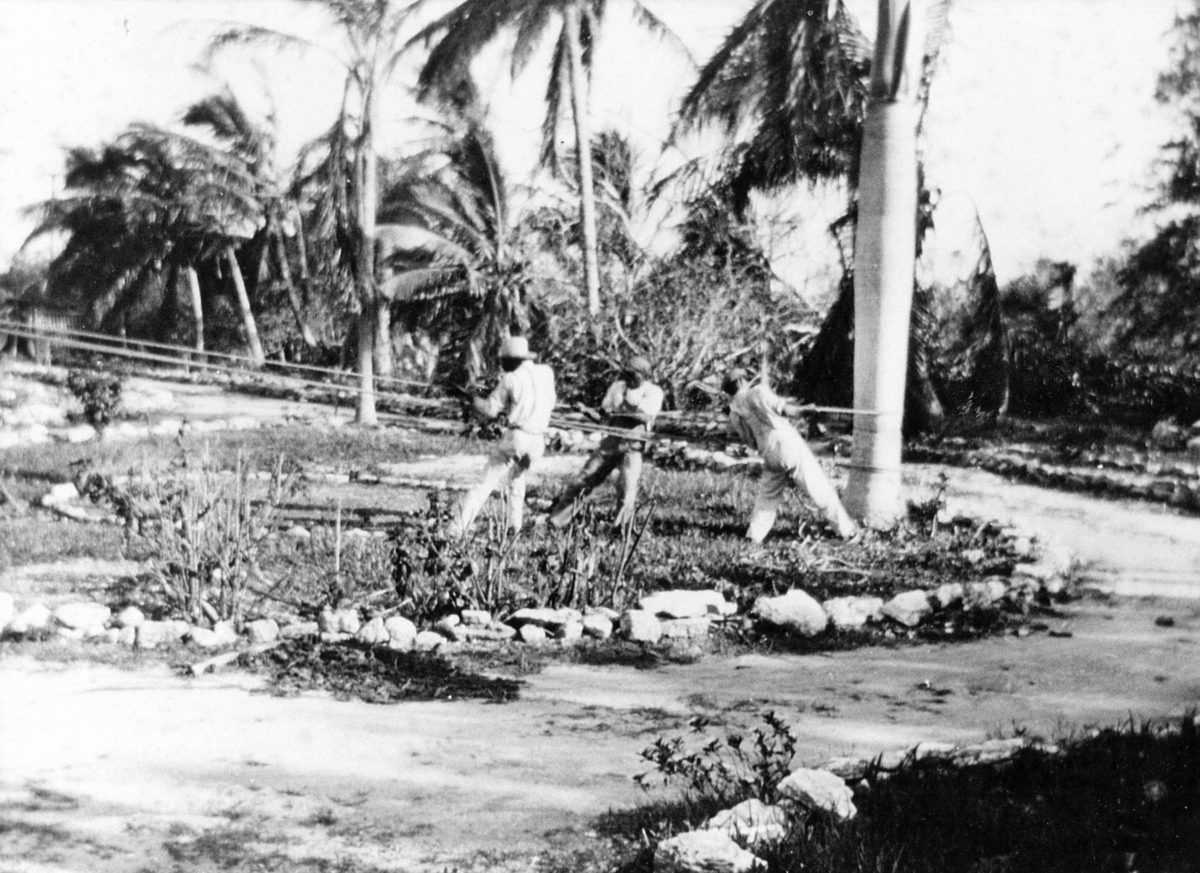 Pulling up the Royal Palms that fell in the 1926 Hurricane

The Langlois rejoiced when they saw the first green shoot from one of their Royal Palms. They had learned to be grateful and joyful for small things.  A few days later on October 20th, a third hurricane hit.   It was not so severe but Margaret and Arthur were out in the storm fighting with the winds to keep their trees from falling a third time.

The three hurricanes of 1926 so altered the garden and left it wide open.  In June of 1927, Arthur planted a row of Casuarinas.  The purpose was two fold to to form a boundary to the main garden and to be a windbreak.

In September of 1928, The Retreat was once again hit with a hurricane, a bad one.  Mrs. Langlois writes:

“I remember how mad I would get. The first hurricane in 1926 made me cry like a baby, after that I got mad and cursed on the second one, the third one produced a stony silence and a set determination not to be beaten.”

1929 saw Margaret and Arthur full of plans.  Margaret took her Mother to New York to recover from an “illness” .  Arthur was to join them and they were to continue to England for a holiday, but unfortunately Arthur could not get off work and Margaret and her Mother returned to Nassau in September.  The garden still looked bare but it was green.  Two days after returning home, they heard rumor of a storm approaching from a north easterly direction.  They put their worries aside as they could not see how that would affect Nassau. 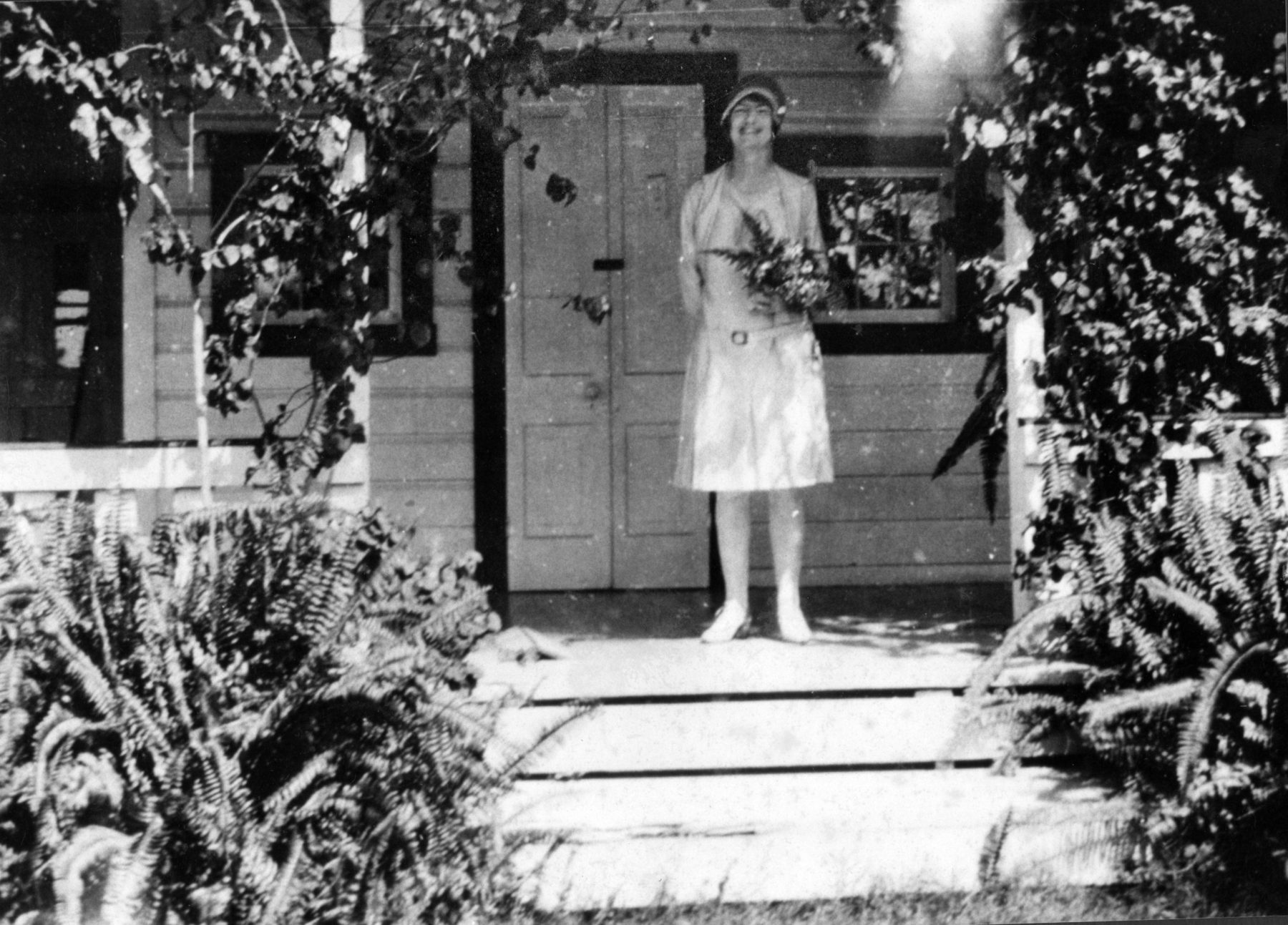 “On Tuesday the wind started to freshen.  Wednesday noon we knew we were in for it and by seven that night a storm with a velocity of a reported 180 miles in gusts was on us. The centre passed at nine and we had calm of an hour, showing how slowly the storm was moving.  When it returned it came from another direction and it was terrifying. The wind hit the side of the house with such force that it as as though a huge giant was pounding us with a sledge hammer. I gave the garden up for lost, feeling so small and little that I realized we would be lucky if our lives were spared. And then I heard it , it was an  indescribable sound.  Even though I had never heard it before, I knew immediately what it was.  It was the roof being torn off the outside verandah, and the bedroom where we were caved in – a rotten stud that could not stand the pressure.  We picked up our blankets and made our way to the dining room and crept under the dining room table, because by now it seemed that nothing could live in that fury of wind and hell let loose. 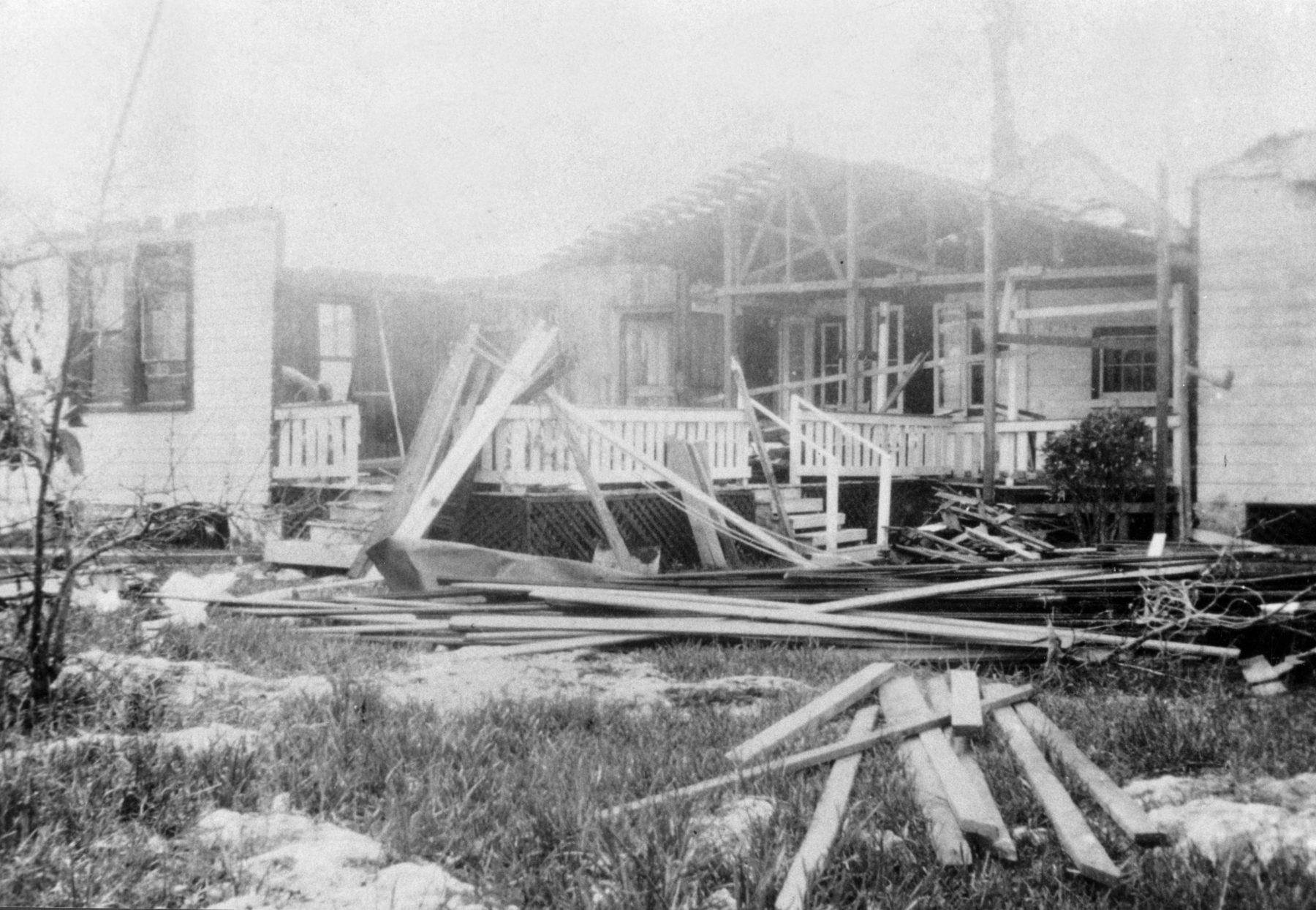 “And then I heard it, it was an indescribable sound, and even though I had never heard it before I knew it was the sound of the roof being torn off.”

On Thursday morning we woke to find no roof left on the bedroom , the library , and the small room adjoining the library. The drawing room rug was swimming in a foot of water and still it blew. We had nothing to eat as the pantry door had blown off and everything in it was wet.  I remember Arthur trying to make a cup of tea over a candle and I begging him to let us sell and move away from such a terrible place.” 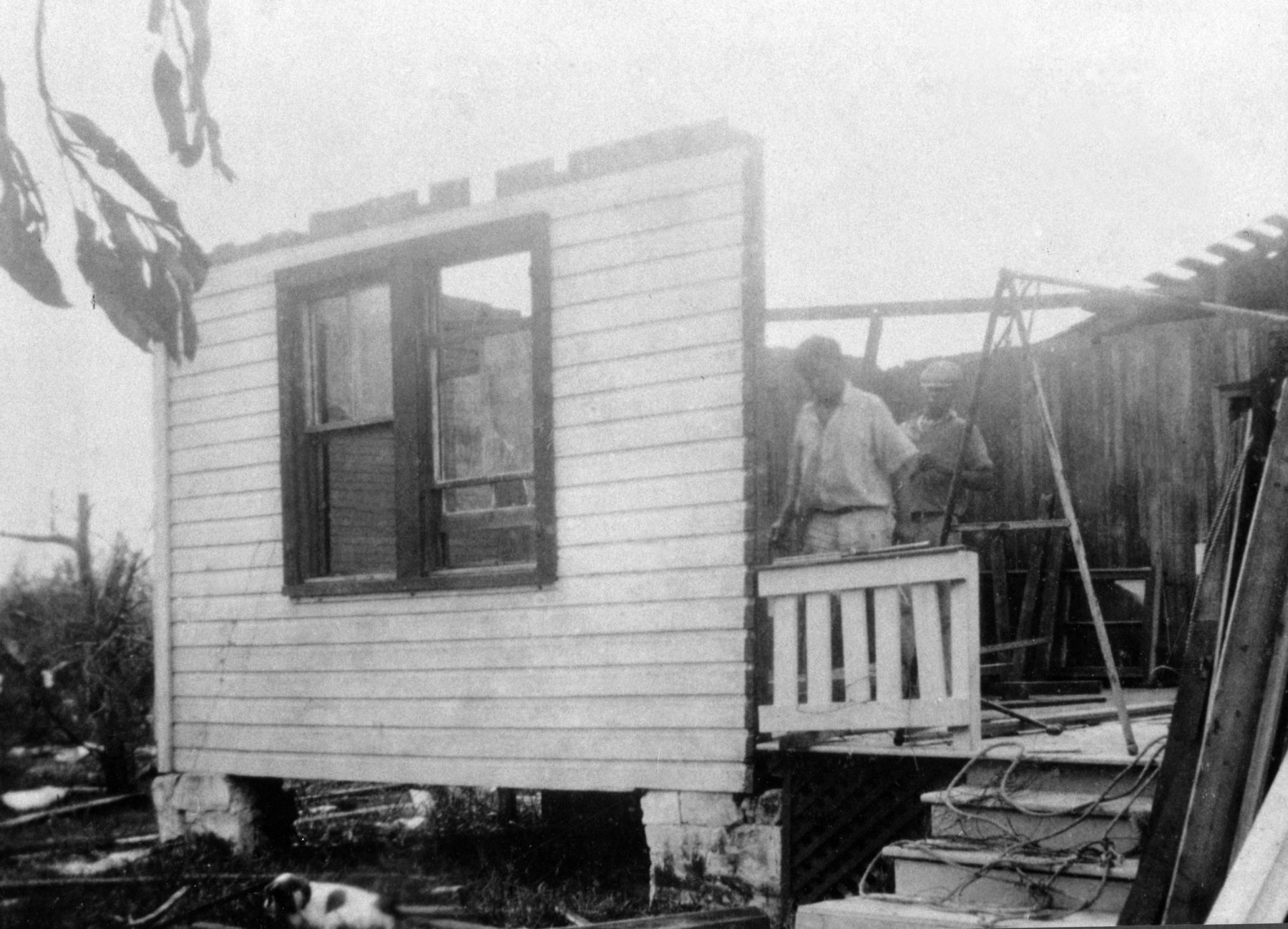 “We woke to find our bedroom and library with no roof.” – Margaret Langlois