Sustaining Our Treasure from the Sea
20
Aug 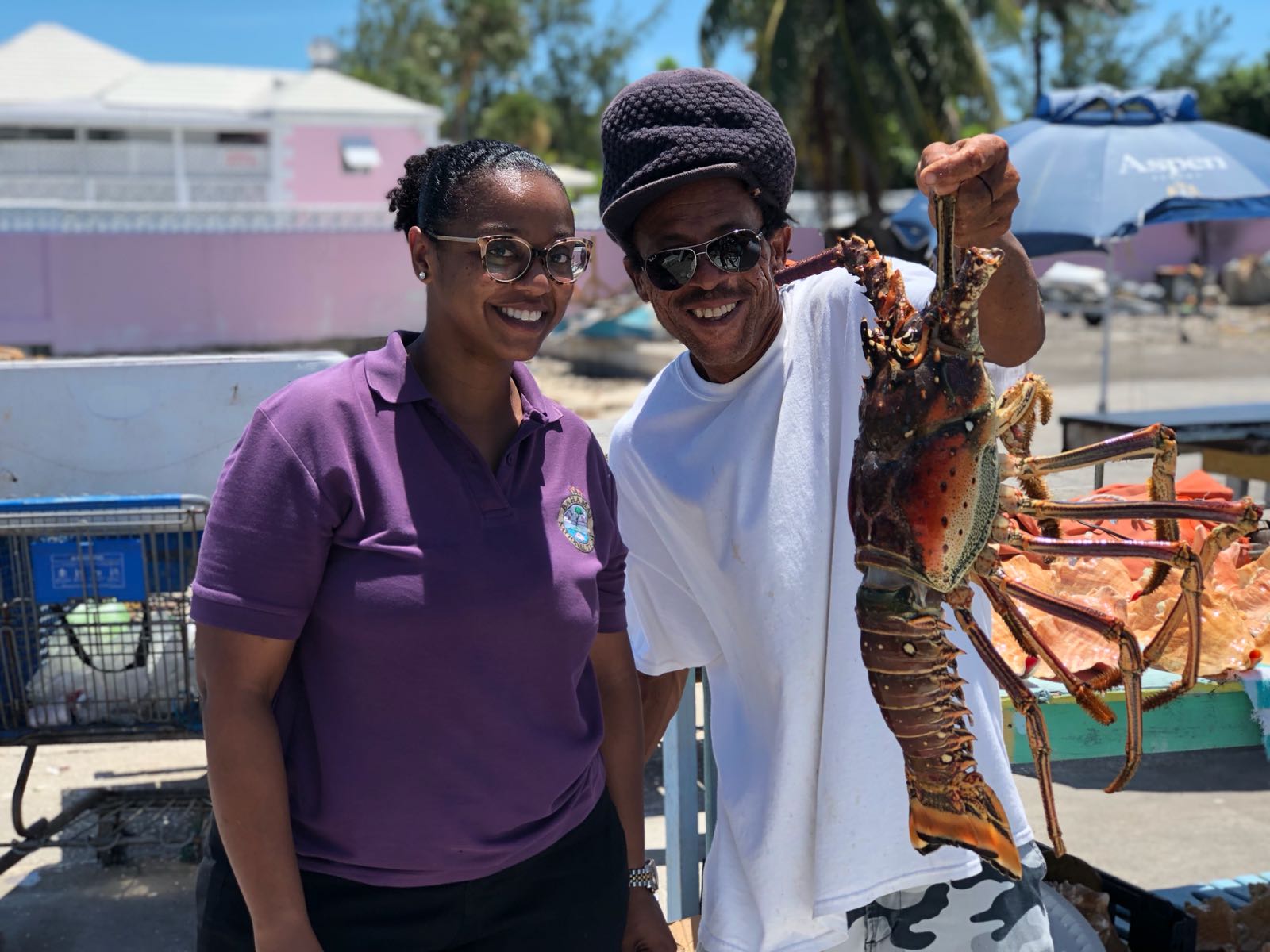 August 1 marks the opening of the Crawfish Season.  The Spiny Lobster or Bahamian Crawfish is one of. the most important commercial fisheries in The Bahamas.

According to data released by the. Ministry of Agriculture and Marine Resources more than $ 57 million worth of fisheries products from Bahamian waters were caught and landed in 2018.   A total of 6, 676, 4560 pounds of fishery products were processed and sold.  The bulk of these products were conch and crawfish.

The report from the Ministry goes on to say that 4, 272, 708 pounds of crawfish valued at $47 million was landed in 2018.  Of that figure, $17.2 million worth of crawfish tails were caught in New Providence while another $29.74 million were harvested in the Family Islands.

The crawfish is a national resource and everyone has an obligation to harvest it wisely and protect it for future generations of Bahamians. In order to ensure the ultimate survival of crawfish populations, regulations exist which stipulate approved fishing methods and gear, open and closed seasons and legal and undersized measurements.  The regulations relate specifically to the lifecycle of the crawfish. Sizes and seasons were determined carefully and are extremely meaningful in overall management efforts. 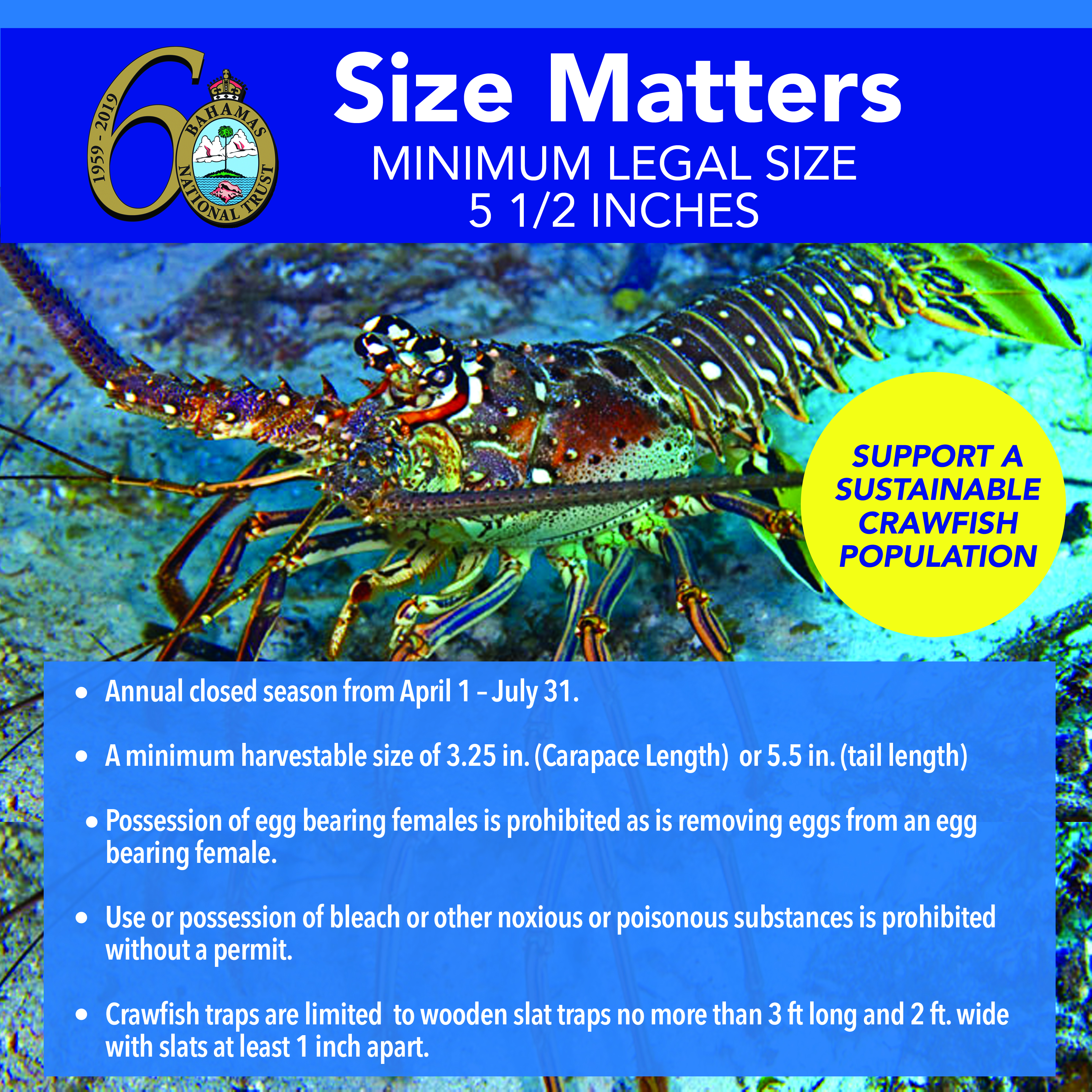 Crawfish are found throughout the tropical and subtropical waters of the Atlantic Ocean, the Caribbean Sea and the Gulf of Mexico. Occurring from South Florida, The Bahamas and. Bermuda to the West Indies. They require several types of habitat throughout their life cycles. As larvae, crawfish drift in the open ocean. In the post-larval stage, they settle in the vegetation of the nearshore bottom (. Benthic). Habitats.  As they develop, juveniles, seek shelter in the crevices of. rocks, sponges, and corals.  Maturing. Crawfish move to deeper reef habitats. Adults live in small groups in protective recesses in reefs during the day and. forage in the open at night.

Crawfish are a valuable economic resource but they also have ecosystem value.  They are an important food source for large groupers, loggerhead turtles, octopus, sharks and. people. Crawfish are “reef cleaners “ and play a vital role in keeping our coral reefs healthy.

In the Bahamas, crawfish are considered generally abundant with localized populations near major population centers. To produce enough larvae to sustain harvest levels, crawfish must be allowed to reproduce undisturbed. Conservation of crawfish habitat is an important element in the sustainability of this important marine resource.

It is generally accepted by scientists today that a network of marine reserves is one of the keys to halting global fisheries decline. Adjacent fisheries benefit from the ‘spillover’ effect, while fish populations inside the reserves increase in size with individuals living longer, growing larger and developing more reproductive potential. 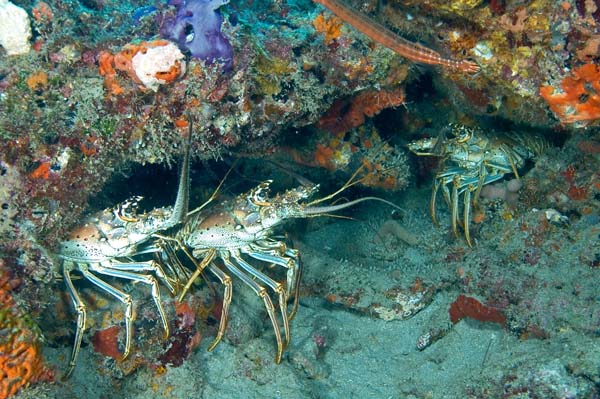 The Bahamas boasts one of the world’s first and most successful marine protected areas (MPAs). Established in 1959 with a complete ban on fishing enforced since 1986, the Exuma Cays Land and Sea Park (ECLSP) vividly illustrates the benefits of MPAs for marine life and fisheries.

The Park is managed by the Bahamas National Trust and covers more than 250 square miles of coral reefs, seagrass beds, mangroves, and sand flats. The Park staff manage visitors, engage nearby residents, and conduct patrols to enforce rules prohibiting all fishing, couching, lobstering, and shelling within the Park’s boundaries. Scientific studies show that these prohibitions have had dramatic, positive results for fishes and invertebrates both inside and outside the marine reserve, as well as for fisheries outside. Large numbers of the conch, Nassau grouper, spiny lobster, and other marine species thrive within the ECLSP ’s borders,  and many of their offspring move outside to boost populations in surrounding waters, with tagged individuals being found as far away as south Long Island some 150 Miles distant.  Scientists found more spiny lobster per square kilometer in the. Exuma Cays Land and  Sea Park than in three other sites in Exuma Sound.

In 2017 the Bahamas National Trust (BNT)  completed a scheduled survey of the Exuma Cays Land and Sea Park. The. Survey Team  assessed the health and biodiversity of reefs, mangroves and seagrass beds at 10 sites within the park and two outside. Most of the sites have been monitored periodically for 15 years.

The survey team was led.by the BNT’s resident scientist, Dr. Craig Dahlgren of the Perry Institute for Marine Science, a marine ecologist who studies protected areas and fisheries. The overall goal of the Exuma surveys is to assess threats to key habitats within park, identify critical resource thresholds, and measure the impacts of climate change on the natural environment. 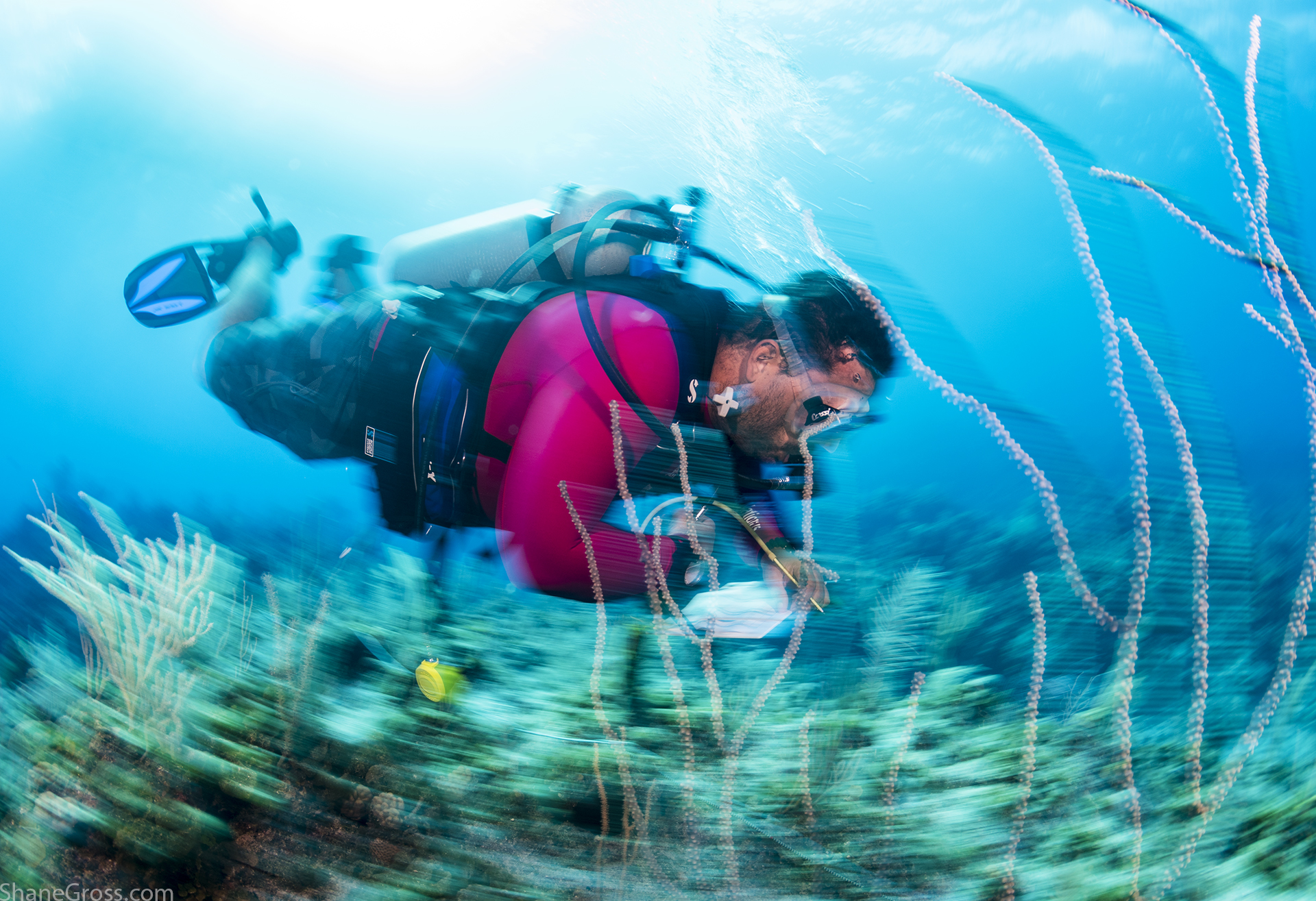 “It is worth pointing out that fish populations in the Exuma park are healthier than elsewhere,” said Lindy Knowles,  BNT  Senior Science officer.  “They are found in more numbers and in larger sizes – especially key predators like groupers and snappers – than in nearly all the areas we surveyed.“

In October 2018, the Exuma Cays Land and Sea Park (ECLSP) earned a  Platinum Global Ocean Refuge (GLORES) Award. A GLORES award is only given to marine protected areas (MPAs) that meet the highest science-based standards for biodiversity protection and best practices for management and enforcement. Each GLORES winning MPA has a strong management team, a clear plan to conserve biodiversity and effective monitoring and enforcement efforts in place. 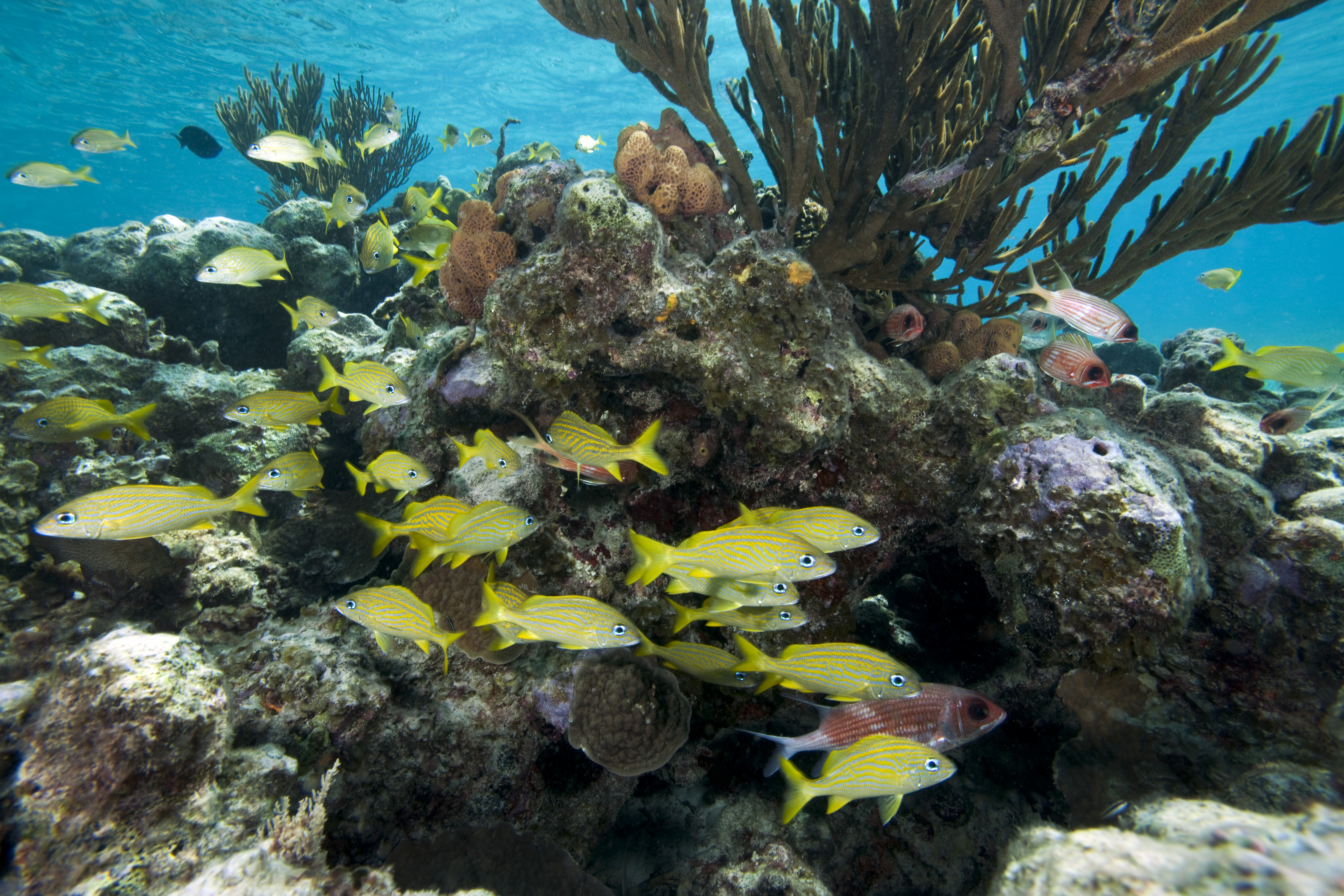 The. Bahamas Protected Project, a collaboration of The Nature Conservancy (TNC), Bahamas. National. Trust (BNT ) and Bahamas Reef Environmental  Education Foundation (BREEF) submitted a Marine Protection Plan for expanding The Bahamas Marine Protected Areas Network to the Government of The Bahamas in October of 2018,  The areas submitted for protection include nursery grounds key for sustaining commercially-harvested fish and spiny lobster, along with key habitats characterized by mangrove trees, sand flats, seagrass, and shallow reef systems. The project conducted a national marine gap analysis to provide the science to support and make the case for 43 new proposed areas which once declared will create a network of MPA’s encompassing the life cycles and larval dispersal of the Bahamas key fishery resources. Establishment of these areas will achieve the Bahamas’ commitment under the Caribbean Challenge of conserving 20%  of its nearshore and marine environment by 2020.

According to Eric Carey, BNT Executive Director The Bahamas has always been a leader in the region and in the world. “ Since the 1990s The Bahamas has been working to establish a network of marine protected areas to enhance the protection of our marine environment and safeguard the environment, culture, and economy of the islands. It is because of this commitment to conservation that The Bahamas, unlike our neighbors, still has fishery resources to support  Bahamian livelihoods.”